Lori Bookstein Fine Art is pleased to announce an exhibition of recent work by Tabitha Vevers. This is the artist's first solo-show with the gallery. Tabitha Vevers: Lover's Eyes will be comprised of works that draw on the conventions of eye portraiture begun in the late 18th century during the Georgian period. Source works for Vevers’ "Lover’s Eyes" series span a 500 year period of art history from Giovanni Bellini to John Currin.

The works from the "Lover's Eyes I" group focus on eyes taken from paintings of women by men. However, Vevers’ paintings give primacy to the gaze of the model looking out, rather than the male gaze of the original artist's eye. The "Lovers Eye II" work focuses on portraits of men created by men and juxtaposed on the opposite wall. Standing in the midst of the eyes gazing at each other, the viewer's role vacillates between the observer and the observed.

The freestanding work, Checkmate: Lee + Man II (after Man Ray + Lee Miller,) also focuses on the unique relationship between artist and model, in this case, Man Ray and his lover, Lee Miller, a photographer in her own right. Checkmate: Lee + Man II is based on Man Ray's famous metronome Indestructible Object (Object to Be Destroyed), which was literally destroyed in 1957 by protesting students, following Man Ray’s instructions: “with a hammer well-aimed, try to destroy the whole at a single blow.” Man Ray recreated the object numerous times between 1923 and 1964, most often using Lee Miller’s eye on all but the earliest metronomes. Vevers’ version is comprised of a similar metronome with the addition of a hammer adorned with Man Ray’s eye taken from a photograph by Lee Miller of on its face.

Tabitha Vevers received a BA in art and art history from Yale University and studied at Skowhegan School of Painting + Sculpture. She is the recipient of many awards including a George + Helen Segal Foundation Grant, an International Association of Art Critics Prize, and fellowships from The MacDowell Colony, Fine Arts Work Center, The Ballinglen Arts Foundation (Ireland), and Oberpfälzer Künstlerhaus (Germany). She has work in a number of public collections, including Yale University Art Gallery, New Britain Museum of American Art, and the deCordova Sculpture Park + Museum where she was recently honored with a mid-career retrospective entitled NARRATIVE BODIES. Her work has been featured in many museum exhibitions, including GOLD at the Belvedere Museum (Vienna) in 2012. Born in New York, she currently lives and works in Cambridge and Wellfleet, MA.

Tabitha Vevers: Lover's Eyes will be on view from May 30 - June 29, 2013. An opening reception will be held on Thursday, May 30th from 6-8 pm. Gallery hours are Tuesday through Saturday, 10:30 am to 6:00 pm. For additional information and/or visual materials, please contact the gallery at (212) 750-0949 or by email at info@loribooksteinfineart.com. 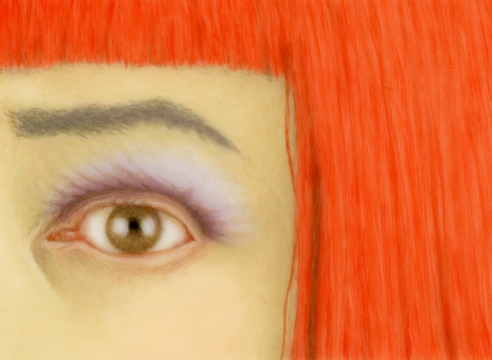