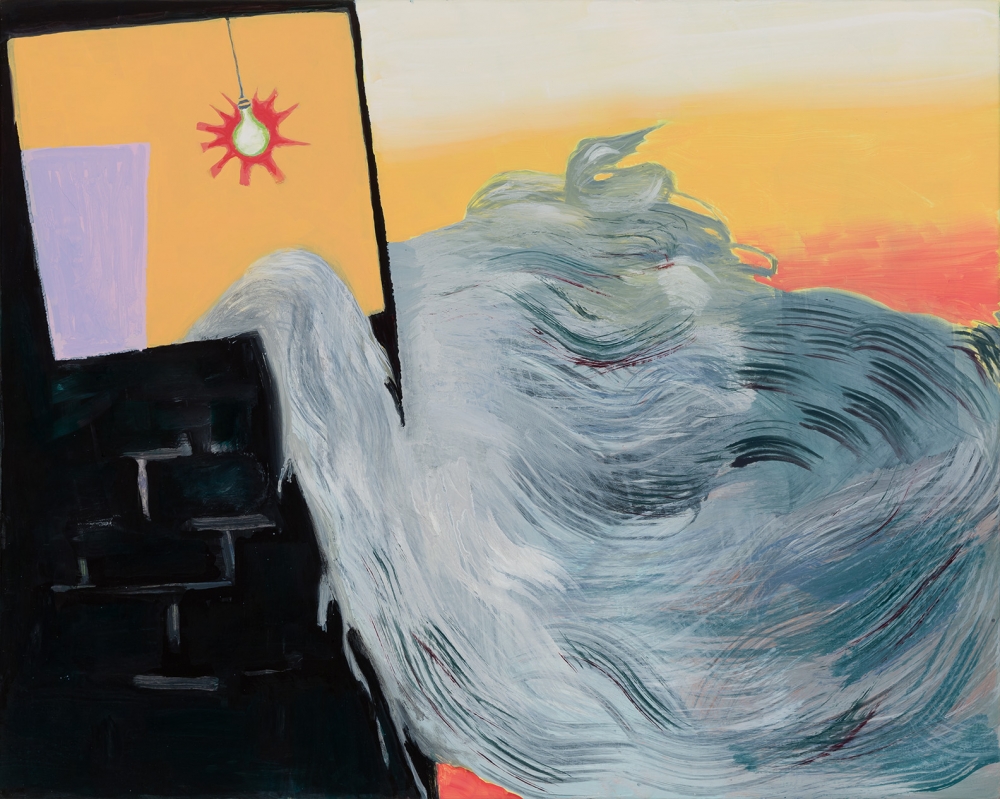 A New Ecology of Signs: Elena Sisto beyond the studio

"Elena Sisto: As We Dream" at Bookstein Projects

Commuting between studios in New York City and up along the Hudson, Elena Sisto has adjusted her paintings to a wider setting. Having focused previously on intimate studio scenes depicting young women painters in fragmentary close-ups, she now incorporates elements of the natural world and glimpses, as though in transit, of urban and rural landscapes. But the new works on view in As We Dream at Bookstein Projects remain firmly rooted in her personal space. Indeed, while they reflect the new ecology of her expanded studio, these unconventional self-portraits involve a heightened self-awareness, an evolving consciousness of the fragile boundaries of nature, self, and the built environment.

With no history of working from landscape, Sisto can note, as though for the first time, the intrusion of an insect, or the distraction of a flower. Virtuosic in her detailed rendering of clothing, hands and heads, she now confronts a new ecology of signs. Long devoted to cartoons and to la pittura metafisica (and an early fan of Hilma af Klint), Sisto can bring a sense of childhood wonder to the shadow of a wasp on a bare canvas. The touch of her brush takes on metaphysical implications as conventions of shading and outlining assume abstracted forms, generating symbolic images of leaves and flowers in her garden, where a pond outlined in decorative zigzags inevitably recalls the artifice of Giverny.

As if to extend this metaphysical invocation of Impressionism, Sisto’s self-portraits assume vivid new colors, as though some light attuned to emotional temperature were suddenly turned on. Impressionistic not only in their brilliance and complementary color contrasts, the heads in her portraits are calligraphic, suggestively ephemeral, like the play of emotion itself. While fugitive, their faces are placed at a greater subjective distance than the previous, more naturalistic ones. Vagabond (for Agnes Varda) (2018) alludes to the unconventional film director of Faces, Places (2017); Sisto invokes the cinematic gaze, which here is objectified in the profile views of Vagabond and Mister Moonlight (2018). Sisto’s subjects don’t meet our eyes, or do so only with the confrontational, sun-shaded ones of Orange Field (2018). The deep purple of that face, the orange of Vagabond, or the green of Spirited Away (2018), where even Nancy, a familiar cartoon surrogate from Sisto’s earliest works, returns in lime green – a vehicle for more complex, adult emotions that now include estrangement – suggest that much more is going on here than in the studio paintings. Enhanced luminosity evokes exposure and vulnerability, an uneasy undertow of ecological and sexual forces, which Sisto associates throughout with exaggerated masses of hair. Emblematic of femininity, these also recall Leonardo da Vinci’s drawings of storms and floods. Sisto finds ironic humor in the way natural disasters, and the stark realities of sexual politics, compete for attention with preoccupations with fashion.

Hair overflows in Rapunella (2018), around a dark tower that invokes the genius of Philip Guston. His light bulb hangs in Rapunzel’s high window in an apparently empty studio, along with a blank canvas. Its orange glow extends into the sky outside, over churning coils of hair that press the boundaries of the frame. Alluding to the sublime, Sisto combines Guston’s cartoon-like simplification with intimations of apocalypse. The coils end with a whimsical flip, aligned with the canvas and bulb. Exiled from the sanctuary of the studio – like Guston under Nixon – Sisto upholds its formal ideals as a beacon for troubled times.