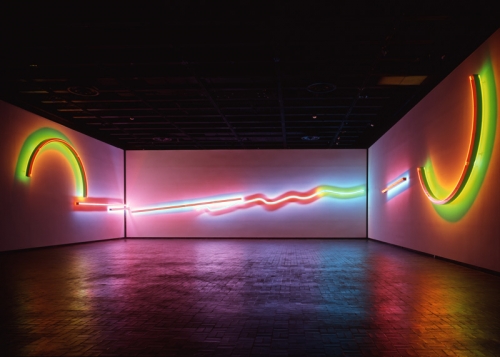 Stephen Antonakos (1926 – 2013) was born in the Peloponnese but came of age in Brooklyn as part of a generation who grew up in a city suffused in the candy-colored ambient glow of neon. Along with Dan Flavin and Bruce Nauman, he transitioned commercial lighting into the realm of fine art. But where Flavin employed industrial flourescent fixtures in geometric designs related to the ground and human scale, and Nauman worked neon into carefully composed conceptual word play, Antonakos delighted in using neon in an architectonic way and as a vehicle for magical effects.

This is the case of Proscenium (2000), one of his largest and most successful works, which dances through the cavernous space of the Neuberger, its traced forms conjured as if from Tinkerbell’s wand. Designed for the Neuberger’s multi-purpose Theater Gallery, it is sized to the space but not site-specific. In theory it could be shown in a similarly-scaled room elsewhere, but it is best seen at SUNYPurchase, along the three walls of this massive box of an unlit and cleared-out room used for all variety of perfomances.

The title implies that the work could be seen as a frame for a stage, although in more modern usage proscenium refers to the visible stage in front of the curtain, a kind of liminal area between performative space and the audience. But Antonakos riffs off the idea of a proscenium arch, here, with the forms that anchor the flanking walls of the composition: at the left a rising arch of red with its green backing light, and at the right a bowl-shaped smile of a curve of the same color scheme. Trained as our eyes now are in the translation of primitive emoji marks, one reads these abstract shapes as dour and the other as jovial—a modern take on the tragedy and comedy choral masks that date back to ancient Greece. These reach out to embrace visitors to the space, and those involved in performances for which the work serves as a backdrop.

The work is made of seven lengthy box fixtures with neon tubing in complementary colors on either side. The rising arch at left is followed by a long pink tube backed by yellow parallel to the floor and then a shorter pink horizontal section, slightly inclined up and cantilevered off the left wall to intersect the far wall. There are two lengthy fixtures on the broad back wall: a straight section angled up some ten degrees to the right, and then a separate, squiggly line at a similar angle that originates a little over halfway along the underside of the former. The backlighting changes colors three times along this snaking form from pink to red to green. On the right wall there is the first great gap in the sequence, between the corner and a red-fronted and blue-backed straight length, continuing the established rising angle. Then there is another gap, and finally the bowl-shaped curve. The overall length is just under 190 feet, and at its apex Proscenium rises twenty and one half feet.

As the curators Avis Larson and Helaine Posner write, “From time immemorial [light] has been associated with spirituality and the divine presence,” and “evokes this mystical relationship.” This is undoubtedly true, but for anyone growing up in New York City around the Second World War, as Antonakos did, neon signage and its depth of tone - its imperfect and tremulous glow, its status as a kind of script in the sky - conveyed less lofty aims than God’s hand searing text into the walls of Babylon at Belshazzar’s feast. Instead, the iconic neon signage of the 20th century urban cityscape denoted a diner, a delicatessen, a bar, a bakery, a theatre. Such writing in the air is fast becoming an endangered species so that few things are as melancholy for the long-time resident as a long-darkened neon sign. They remain legible, but have lost their spirit. However, in Antonakos’s hands neon becomes something abstract and magical.

There are three drawings for the work displayed unobtrusively on the fourth wall and they resemble engineering plans more than artist’s sketches, per the artist’s precise practice. And an earlier Antonakos work, Untitled (for Sally Yard) from 1985, forms parts of an adjacent fine small show, Blinding Light: Neon Art 1965 to Now, including works by Paul Seide, the great Cerith Wyn Evans, Agnes Denes, Tracey Emin, and Glenn Ligon’s provocative Warm Broad Glow (2005), yellow light tubes with the fronts painted black that reads “negro sunshine.” The display highlights the potentialities of neon as envisioned by contemporary artists like Antonakos, even as its commercial use fades.