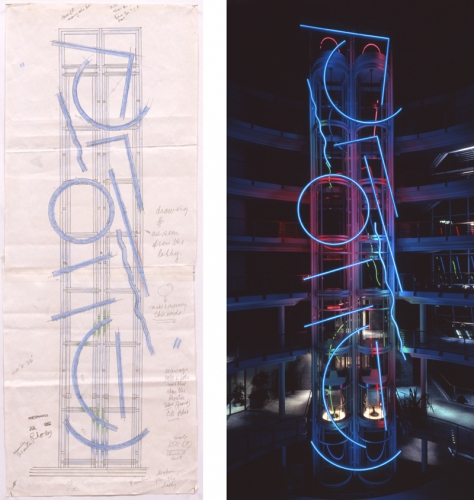 Stephen Antonakos was instrumental in the introduction of neon to the realm of fine art, engaging the noble gas, glass, color and line as a painter uses paint. His interest in columnar forms—especially lighthouses—was a natural counterpart. Tower was an early project in Houston in 1975; Pharos (Greek for lighthouse) was a major installation in Athens in 2011.

In 1993, Antonakos designed and fabricated a major tower installation for the Stadtsparkasse in Cologne, Germany, an indoor site with an enormous atrium. Visible from various angles at seven different levels, the neon forms facing outside were blue; those facing inside were of varied colors.

Although Antonakos created many light artworks for personal spaces and private enjoyment, a great number of his neon projects respected the lineage of the medium and its ability to broadcast to the public at large. In turn, he was keenly aware of the place of the artist in public visual arts discourses, as his Notes of Public Art makes clear,

"For me neon is not aggressive, but it has certain powers. It can be seen from great distances, and it can be used not just linearly but spatially. The color can be strong or soft. It all depends on what you want to do. I simply thought that so much more could be done with it abstractly than with words and images. I had a feeling it could connect with people in real, immediate, kinetic and spatial ways.

Visual experience is inner experience. What I hope to do is open an access to a kind of experience—more intense, heightened, perhaps more conscious, open.

Scale is really almost a medium. It is what you have to work with.

The sky is the ultimate sculptural challenge. It has the greatest possible scale—and it changes completely over the hours of the daily cycle.

Every work of public art is a responsibility that implies a great trust between the artist and the community."