Bookstein Projects is pleased to announce an exhibition of works on paper by Hans Hofmann. This is the gallery’s first solo show of the artist’s work.

This exhibition will bring together approximately twenty works on paper made between c. 1935 – 1944 by the renowned postwar abstract painter, Hans Hofmann. While the artist’s canvases are widely exhibited and celebrated, his works on paper remain lesser-known, despite the fact that they were a crucial part of the artist’s overall oeuvre. While Hofmann explored a range (and synthesis) of styles – Fauvism, Cubism, Abstract Expressionism and others – his work on paper remains a constant. It also served as a site from which he could explore these styles in rapid succession and with a greater sense of freedom. Executed in a range of media including India ink, pencil, crayon, gouache and watercolor, these works reveal the same vivacity and spirit that have become a trademark of Hofmann’s canvases.

“The creative process lies not in imitating, but in paralleling nature — translating the impulse received from nature into the medium of expression, thus vitalizing this medium. The picture should be alive, the statue should be alive, and every work of art should be alive.” [i] –Hans Hofmann

Lori Bookstein Fine Art and Bookstein Projects have an extensive history working with the legacy of Hans Hofmann. The gallery formally represents the following artists, all of whom have studied with Hofmann: Jan Müller, Paul Resika, and Anne Tabachnick. In addition, past shows include The Legacy of Hans Hofmann: Selections of Painters from the Hofmann School (1999), which featured women of the school, and Speaking Through Paint: Hans Hofmann’s Legacy Today (2014), an exhibition curated by Stacey Gershon and Deborah Goodman Davis.

Hans Hofmann (b. 1880 Weissenburg, Germany – d.  1966, New York, NY) began his art education in Munich before moving to Paris in 1904. While in Paris, Hofmann frequented the Café du Dome where he met the many artists, dealers, and intellectuals who gathered there. It was during this time that Hofmann took drawing classes at the Académie de la Grande Chaumière and the Académie Colarossi, and was introduced to Matisse, Picasso, and Braque. While on a visit home to Germany in 1914, the outbreak of World War I prevented Hofmann from returning to Paris, so in 1915 he opened his own art school in Munich, which quickly garnered an international reputation of excellence. In 1930, Hofmann traveled to the United States, and from 1930 to 1932 he was invited to teach at the University of California, Berkeley, and at the Chouinard School of Art in Los Angeles.

Hofmann moved to New York in 1932. He taught a drawing class at the Art Students League and in 1934 he opened the Hans Hofmann School of Fine Arts in New York. In 1935, Hofmann’s School additionally began to hold summer sessions in Provincetown, MA. Hofmann became well known not only as an important artist of the time but also as an admired teacher. Some of his distinguished students include Helen Frankenthaler, Lee Krasner, Louise Nevelson, Joan Mitchell, Wolf Kahn, Paul Resika and Jan Müller.

Most recently, a comprehensive survey of Hofmann’s practice entitled, Hans Hofmann: The Nature of Abstraction, was mounted by the Berkeley Art Museum and Pacific Film Archives, Berkeley, CA, (February 25 - July 21, 2019) and traveled to the Peabody Essex Museum, Salem, MA (September 27, 2019 – January 6, 2020). In 2017, the first museum exhibition dedicated to the artist’s works on paper entitled, Hans Hofmann: Works on Paper, curated by Karen Wilkin and Marcelle Polednik, was organized by the Museum of Contemporary Art Jacksonville, Jacksonville, FL (January 28 – May 14, 2017) and traveled to the Portland Museum of Art, Portland, ME (June 16 – September 10, 2017). During his lifetime, Hofmann exhibited extensively with Kootz Gallery, New York, NY beginning in 1947 and showing every subsequent year through 1966, except for 1948 and 1956. The artist’s work was also the subject of exhibitions at the Art of This Century Gallery, New York, NY (1944); the Addison Gallery of American Art, Andover, Massachusetts (1948); Whitney Museum of American Art, New York, NY (1957); the XXX Venice Biennale (1960); and the Museum of Modern Art, New York, NY (1963). 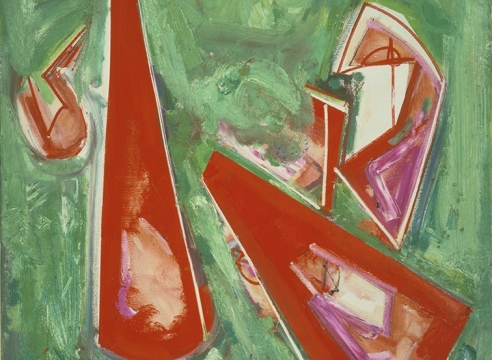 Artnet News selects "Hans Hofmann: On Paper" as one of Favorite Gallery Shows to Visit Virtually

Bookstein Projects is pleased to share that Artnet News has selected "Hans Hofmann: On Paper" as one of  it's Thirteen Favorite Gallery Shows to Visit Virtually